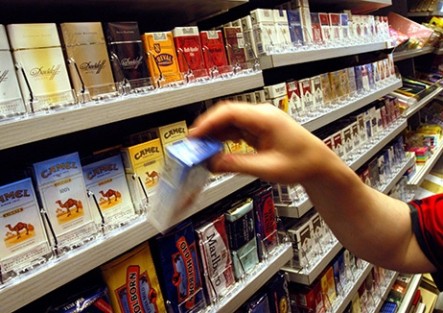 Boston, MA – New research from Harvard School of Public Health (HSPH) shows that one year after the federal government passed a law banning word descriptors such as “light,” “mild,” and “low” on cigarette packages, smokers can still easily identify their brands because of color-coding that tobacco companies added to “light” packs after the ban. These findings suggest that the companies have, in effect, been able to evade the ban on misleading wording—thus still conveying the false and deceptive message that lights are safer than “regular” cigarettes.

In addition, the companies failed to apply for applications to have these products approved as “new products” as called for by the law.

The study was published online March 13, 2013 in Tobacco Control.

“The tobacco industry was found guilty by a federal court in 2006 for deceptively promoting ‘light’ cigarettes as safer after countless smokers who switched to lights died prematurely, thinking they had reduced their health risks. After a new federal law was passed in 2009 to end the tobacco industry’s deceptive marketing practices, the industry has apparently circumvented it by using new and sophisticated ways to deceive consumers and has not sought Food and Drug Administration approval for these products as required by law,” said study co-author Gregory N. Connolly, director of the Center for Global Tobacco Control at HSPH and professor of the practice of public health in the Department of Social and Behavioral Sciences.The new study focuses only on the use of color-term descriptors, which have evaded the “lights” ban, and does not address the choice of colors.

After the U.S. Surgeon General’s 1964 report found that cigarette smoking causes disease, tobacco companies began marketing “light” cigarettes with ventilation holes that allowed air to mix with smoke, which the companies said would limit the amount of smoke a person would inhale. However, a 2001 National Cancer Institute (NCI) report found that smokers compensate for the lower smoke yield in “light” cigarettes—and thus ingest as much tar and nicotine as “regular” cigarettes—by smoking more intensely, more often, or by blocking the ventilation holes with their fingers or lips.

In 2006, a U.S. federal court ruled that tobacco companies should be banned from any future use of descriptive words that convey a false health message. The FDA—given the authority to regulate tobacco products in 2009 as part of the Family Smoking Prevention and Tobacco Control Act—subsequently issued its ban.

To see whether the tobacco companies were complying with or circumventing the ban, the HSPH researchers examined retailer manuals from the tobacco company Philip Morris; manufacturers’ annual reports filed with the Massachusetts Department of Public Health; national cigarette sales data; and the results of a 2011 national public opinion survey that included questions about smokers’ perceptions of their brands being “light” or regular.

The study describes how Philip Morris removed the terms “light,” “ultra-light,” and “mild” from cigarette packs and substituted new brand names and colors. For example, the “Marlboro Light” brand was renamed “Marlboro Gold,” “Marlboro Mild” was renamed “Marlboro Blue,” and Marlboro Ultra-light” was renamed “Marlboro Silver.” Other tobacco companies made similar changes. The cigarettes themselves remained unchanged, however; the percentage of ventilation in each category of “light” sub-brands was the same after being renamed and given a new color descriptor. Ventilation is the principle determinant of whether a cigarette is called “light.”

In addition, the study notes that a Philip Morris brochure for retailers stated, “Some cigarette and smokeless packaging is changing, but the product remains the same. For trade use only: not to be shown or distributed to consumers.”

In the public opinion survey, more than 90% of the smoker respondents said that, one year after the FDA ban, they found it either “somewhat easy” (10%) or “very easy” (82%) to identify their usual brand of cigarettes—in other words, they still thought of certain brands as “light” even though the packages did not use the “light” descriptors.

“This study demonstrates the continued attempts of the industry to avoid reasonable regulation of tobacco products. Scrutiny is needed by the FDA and courts to ensure that tobacco manufacturers comply with the law and that their products no longer convey false impressions of reduced risk,” said study co-author Hillel Alpert, research scientist in the Department of Social and Behavioral Sciences.

The results will be presented at the annual meeting of the Society of Nicotine and Tobacco research on March 14, 2013 in Boston.

Visit the HSPH website for the latest news, press releases and multimedia offerings.

Harvard School of Public Health (http://www.hsph.harvard.edu) is dedicated to advancing the public’s health through learning, discovery, and communication. More than 400 faculty members are engaged in teaching and training the 1,000-plus student body in a broad spectrum of disciplines crucial to the health and well being of individuals and populations around the world. Programs and projects range from the molecular biology of AIDS vaccines to the epidemiology of cancer; from risk analysis to violence prevention; from maternal and children’s health to quality of care measurement; from health care management to international health and human rights. For more information on the school visit: http://www.hsph.harvard.edu.